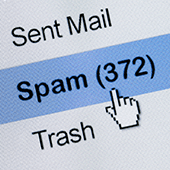 Every day, you receive dozens of email messages, including spam, which is usually harmless, unless there’s a malware attached to it. But even the harmless ones can become more than just an annoyance if you have thousands of them flooding your inbox. Learn how a new spam attack called distributed spam distraction can do more than just annoy you.

Understanding DSD
Distributed spam distraction (DSD) is designed to inundate your inbox with thousands of nonsensical email. There are no dangerous links, ads, or attachments involved, just random excerpts of text stolen from books and websites. What’s worse, the email and IP addresses used are all different, so victims can’t simply block a specific sender.

These attacks last anywhere from 12 to 24 hours and can flood inboxes with as many as 60,000 messages. While they may seem like harmless annoyances, the true purpose of DSD is to draw victims’ attention away from what hackers are doing behind the scenes.

And what hackers are doing is exploiting your personally identifiable information (PII) to make unauthorised purchases or pilfer cash directly from your accounts. The DSD acts as a sort of smokescreen to hide payment confirmation messages behind a deluge of spam messages.

New tactics
Over the years, hackers have developed new tactics involving DSD. Several reports have shown that, instead of nonsensical emails, hackers are using automated software to have their targets sign up for thousands of free accounts and newsletters to distract them with authentic messages. This allows DSD blasts to slip past spam filters that have been designed to weed out malicious code and gibberish text used by traditional DSD attacks.

What’s even more worrying is that any ill-intentioned individual can go on the dark web and pay for DSD services. They just have to provide a hacker with their target’s name, email address, and credit card numbers — all of which can also be purchased on the dark web — and pay as little as $40 to send 20,000 spam messages.

How to stop it
DSD is a clear sign that your account has been hijacked, so whenever you receive dozens of emails in quick succession, contact your bank to cancel any unfamiliar transactions and change your login credentials as soon as possible. It’s also important to update your anti-spam software (or get one if you still don’t have one) to protect your inbox from future DSD attacks.

Hackers only initiate DSD attacks after they’ve obtained their target’s email address and personal information, so make sure your accounts and identity are well protected. You should regularly change your passwords and pins, enable multifactor authentication, set up text alerts for whenever online purchases are made in your name, and be careful about sharing personal information.

For more tips on how to deal with DSD attacks and other cyberattacks, call us today. We offer powerful tools and expert advice that will ensure your business’s safety.